I haven’t used it myself, but one product which sounds interesting is the Lightning Switch, a wireless switch with no power supply. The power to send the wireless signal is provided by the mechanical energy of pressing the switch itself! It appears relatively expensive (as much as a LIFX bulb itself), but could be interesting depending on your budget. They make a low-voltage receiver for 12-volt lighting, so you could hook several of those receivers up to the GPIO of a centrally-located Raspberry Pi, which could then act as a relay between the Lightning Switch system and the LIFX wifi protocol.

There are also more conventional, battery-operated wireless switches, such as Z-wave or Insteon. Again, you could relay the signal through a centrally-located Raspberry Pi.

If you want to go a more do-it-yourself sort of route, you might be better off with a microcontroller rather than a full-blown raspberry pi. Using physical buttons, and a small, non-backlit LCD, or no LCD, you might be able to run it off batteries for a reasonable period of time. Something like the ESP8266 might be an interesting microcontroller to base such a project on. Or, of course, the Photon, already mentioned in this thread.

This is all just informed speculation on my part, though; I haven’t tried any of these things.

Looks like everyones (or a lot anyways) are thinking the same thing, I’am working on a DIY switch using a Teensy3.1, ESP8266 and a 5" capacitive touch panel (no LCD at this time).

5" is just about the same size as the normal house light switch and is a good candidate for replacing once packaged up.

This is how I am thinking it would work:
Tap: On/Off
Swipe Down/Up: Dimmer
Swipe Left/Right: Toggle between White and Colour
Two Finger Swipe Down/Up: Change Colour or White temperature

I’m going to be trying out Flic: 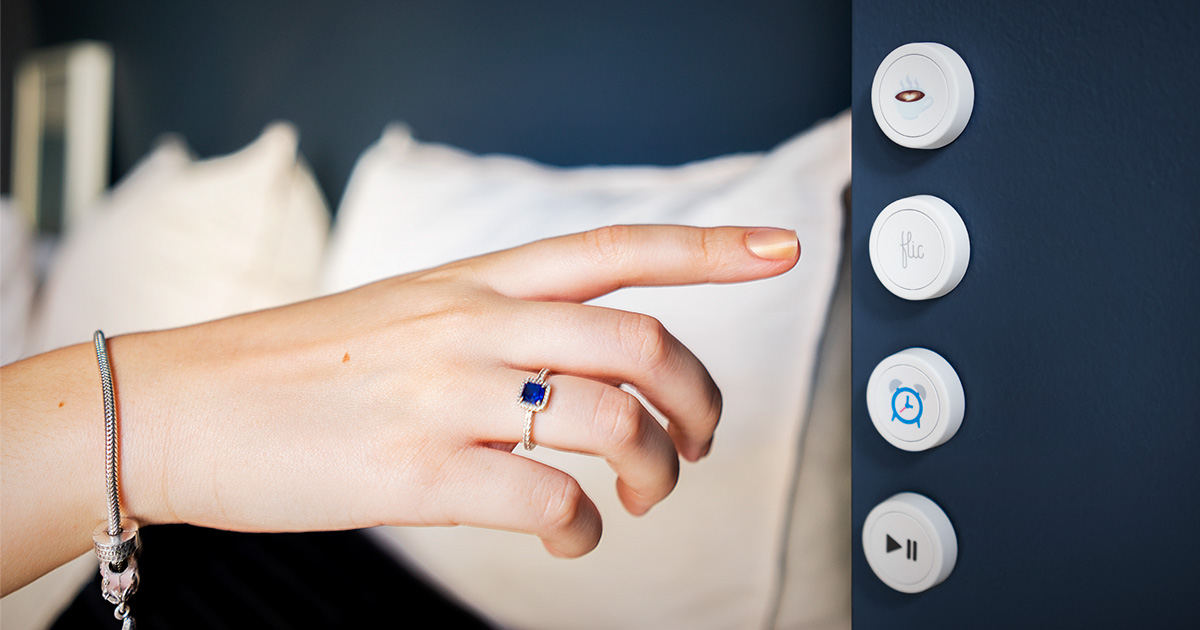 do anyone think capacitive projected it would be a good feature to good switch?

More switch ideas over in this thread.

The best way that I have found currently is to use a Belkin WeMo Wi-Fi wall switch. You can use IFTTT to turn the lights on/off, and dim with a long press.

Hi all, I’m new to this forum and am just completing a renovation where we’ve put 28 Lifx bulbs into our apartment as downlights. Every light in every room will be Lifx. In most rooms I’m happy using the Lifx app and/or mains switch for control. However, the kitchen has the room lights and some pendants on the same circuit and I’d like a physical button to control them separately. I have read through the different suggestions on here but don’t have the skills or time to build something. I had planned on using some flic buttons but have just realized that they need a device running the apps as opposed to communicating directly with the lights. I’ve since had the idea of using a wall-mounted/charged iPod touch as the base for the flic buttons. Any thoughts or experience on this? I’m sure I’ll have more experiences to share as we finish the renovations, move in and start using the lights on a daily basis, hopefully from mid-January.

Has anyone tried (and had luck with) controlling Lifx bulbs by a wall switch? I know that I could get the Belkin WeMo WiFi switch to work using IFTTT, however since the Lifx bulbs are officially compatible with the Samsung SmartThings hub (Z-Wave), has anyone tried controlling the bulbs with a Z-Wave switch (preferably one with dimming capabilities)?

I wanted to update this thread with another project thread since it will be used in what I’m hoping will be a reasonable solution to the original question: Lightsd: a daemon with a JSON-RPC API to control your bulbs - #52 by lopter

Basically, using a raspberry pi, the lightsd daemon from the thread link above, razberry to talk to zwave scene controllers or whatever I can get to work and have the razberry send commands to lightsd rather than to other zwave devices (there seems to be an extensive javascript environment for razberry)

I also wanted to link this here to ask if anyone has used zwave more as something to send signals and not just control the power level of other zwave devices? I’d prefer to use dimmer switches in some places and not just scene controllers. Anyway I’ve ordered the razberry and a controller for now so hopefully another update soon!

Hey Trevell, I’ve start a thread @ https://community.lifx.com/t/touch-screen-controllor/896, thing we be a bit slow but I’m hoping to get back into this in the next few months.

If someone would make this for me I’d buy it

Uses gestures to control your lights.

Hey guys, saw this post today and figured it would be really simple to make in conjunction with my Home Remote app. The latest version (out shortly, waiting for review) provides a web server so actions can be accessed easily from a query string, and then Home Remote will do the heavy lifting.

In my office I have milight, Hue and LIFX and have a Home Remote action to control all of them. I put a Spark Core in a light housing and get it to call one of 2 URLs depending on the switch position. All in, it took me around 20 minutes to write the Spark Core software and put in the housing. Here is the result: 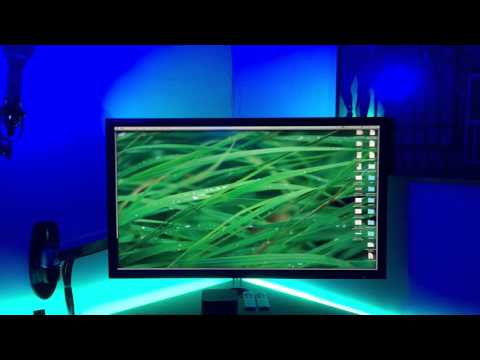 I’m also keen a solution for this. There will always be people in a household who aren’t quite as enthusiastic as others…
I already run a RPI with z-wave for some heating control. I was considering z-wave.me wall controllers which are battery powered (2 year life). My main concern is latency. If it takes more than 2 seconds, people will just mash the buttons… I fear that once the message has negotiated the various systems it will be way more than 2 seconds. Has anyone tried anything similar?

I think I’ve been updating a different thread, so quick reply here that I do have my RPi, Razberry and 2 zwave controllers, controlling my 20 LIFX lights. Latency is typically less than half a second, although sometimes a few lights take longer, but lightsd handles that communication. The only real issue I have is that I am only scanning for zwave communications and not actually using the zwave controllers change the line voltage, and I also cannot set the zwave controllers (i.e. say I wanted to flash a light or something…not a big deal).

In all, RPi changes the lights HSBKs each hour as well as on/off states and then the zwave controllers also have the ability to override and given some time I’ll probably tweak the functions based on usage (i.e. when a zwave controller is clicked, what SHOULD happen"…currently just toggling lights)

Once everything was setup, working very smooth…

quick reply here that I do have my RPi, Razberry and 2 zwave controllers, controlling my 20 LIFX lights. Latency is typically less than half a second, although sometimes a few lights take longer, but lightsd handles that communication. The only real issue I have is that I am only scanning for zwave communications and not actually using the zwave controllers change the line voltage, and I also cannot set the zwave controllers (i.e. say I wanted to flash a light or something…not a big deal).

In all, RPi changes the lights HSBKs each hour as well as on/off states and then the zwave controllers also have the ability to override and given some time I’ll probably tweak the functions based on usa

What type of controller setup are you using on your RPi? I’m considering openHAB, with a z-wave stick, and various z-wave wall switches. Is this similar to what you’re using? I noticed you’re using lightsd, how does this fit into your topology?

Try this thread: Lightsd: a daemon with a JSON-RPC API to control your bulbs - #56 by yeltrah

Sorry I don’t understand the specification about controller setup on my RPi…it’s just an RPi connected via wired (and wireless recently) using Raspbian (this may have made things a little harder than needed, but worked in the end).

When you say zwave stick, I’m using the Razberry daughterboard, and although I have thought about OpenHAB which would work, I don’t really have the need for that much overhead right now but understand that it works beautifully with the Razberry API (google Razberry OpenHAB…fantastic writeup)

LightsD is interesting since there are other ways to connect without it (I’m sure with OpenHAB you can talk directly to the lights as well), however the latency to handshake is what lightsd excels at since it’s in constant communication with the lifx network. I doubt you’d have to go far to figure this out yourself, and I’m happy to ramble on a bit more, but the “always connected” model just works better than whatever else I’ve tested. I admit however to not knowing how the android (or other) lifx apps communicate so quickly…my guess is they are also always connected from the time you open the app and are in the wifi vicinity, but that’s just a guess.

Hi Scott
I’m working on installing Lifx in all my downlights also. l will start with a similar number and all going well I will end up with 40 or more. I would also like to have motion detectors so hallway lights come on automatically. I’m very interested to hear your progress. Do you have the flic buttons working? Have you had any issues with reliability of the system? did you need to make any changes to your wifi to accommodate the number of lights? Looking forward to hear what you’ve learned.

Hi Richard, that sounds exciting. I haven’t tried flic yet, just all our iOS devices. I’m really happy with the lights. The only issue is the network setup. Prior to embarking on this I wasn’t aware that home wifi routers are limited in the number of devices that they can connect to. For some routers the number of devices can be as low as 10 and it’s usually 25-30. This number is rarely advertised so it does take some effort to find out. I have 25 LIFX bulbs and about 12 other wifi devices (phones, laptops, tablets) which all want to connect to the same wifi network. I’ve had to setup a second wireless access point to stop lights falling off the network. This is fairly stable (but not 100%) and I haven’t found any discussion of the best way to do this. I initially had both routers broadcasting the same SSID but have now changed to 2 SSIDs as the lights weren’t evenly distributed. I’ve manually assigned half the lights to each SSID. I’m only doing DHCP on one router, which works, but I’m not sure if that’s correct. LIFX help has been ok but they keep dodging my question about how to setup lots of lights. It almost feels like they’re not aware if it has been done! It’s changing the topic of this thread but I’d love to hear how others manage 35+ devices.

You could use a Ubiquiti Access point to extend your wifi network. They have a hard coded limit of 127 connected clients (ie: LIFX bulbs) but if you get the pro version you can run a network on two different radio frequencies (2.4 and 5 ghz) allowing you to have 254 connected clients (allegedly, I haven’t tried that myself)