I purchased a couple of bulbs from Amazon and when I got them in and installed them none of them showed that they were LIFX+ or had the eye icon like my first + bulb. They just showed as A19 bulbs. I sent for a return from Amazon and they again sent me a LIFX with a bulb that didnt show as a + bulb. On the pictures on the box it shows that there is a bulb symbol with a + under it. The ones I have do not have the +

Am i setting these up wrong or doing something wrong? All of the bulbs I have received have LHA19E26UC10 on them. I find it hard to believe that I can get three bulbs from Amazon and all of them have the wrong bulb in the box. Tried posting this under a ticket but after getting one response a week ago I have received no responses for any update I make to the ticket. Figured I would ask you guys over here on the forums.

All of the infrared LIFX+ bulbs have a [+] printed under the logo. Normal A19 LIFX bulbs (3rd gen) will only have the logo.

I don’t know what page you purchased the lights from on Amazon, so I’m not able to tell you if you were on the wrong product page. What I can say is based on that model number, you have the regular 3rd gen LIFX bulbs.

They definitely came in a black box that says + on it. I went ahead and filled out the warranty replacement with LIFX to get them replaced. I had Amazon do a return and exchange for one of them last week just to see what I would get and it was the same thing.

If anyone is thinking about grabbing a LIFX+ I would recommend getting them directly from LIFX since it seems like Amazon must have a whole bunch of LIFX+ boxes without + bulbs in them.

That sounds like a pretty big issue. If you haven’t already, I’d say contact LIFX support and see if they can help you out. Even informing them of this is important.

You bought these from Amazon directly, not a 3rd party seller either?

Funny thing is LIFX are or were on sale yet they have only a few bulb models left. e.g. no br30 only br30+
they have had the sale and lack of stock for so long it feels like they are going under. I asked and they said no but still there is no new stock and no new announcement so something is up.

Thanks for pointing this out to us, we’re actively looking into this and have contacted Amazon to conduct an audit.

This is not expected and we hope to quickly get to the bottom of this.

The link that I ordered the bulbs from was: 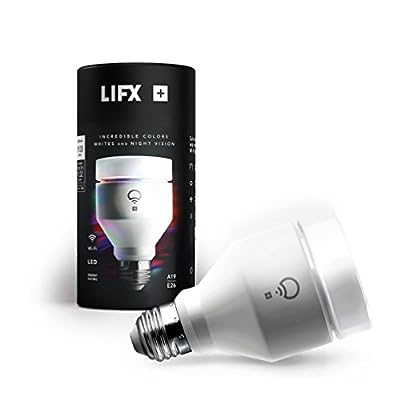 LIFX + (A19) Wi-Fi smart LED light bulb with infrared for night vision, adjustable, multicolor, dimmable, no hub required, works with Alexa. With LIFX, how your bulb connects is important, so all of o ...

It shows that it is shipped and sold from Amazon. Like i said I ordered two total, one on July 26th and it was delivered to me on July 28th. It came in the black box but no + on the bulb itself. I ordered another one on August 7th and received it on August 9th. When it didnt have the plus on it either I figured I was just installing wrong since they both said + on the boxes. After opening a ticket I initiated a return and exchange with Amazon and received another black LIFX+ box and sent one back. Upon opening the new box it had no plus either.

Looking at the bulbs I have installed it looks like the standard color bulbs all show as LIFX Color 1000. The first + I bought when they first came out shows as LIFX+ (A19). My standard whites show as LIFX White 800 (LV). The two that I have in hand from Amazon that I just got in the LIFX+ boxes just show as just LIFX (A19). Wasn’t sure if maybe i just missed a step and need to update them or something?

That is the correct packaging for the Lifx+ bulbs, but the bulbs you pictured are not Lifx+.

If it was a Lifx+ bulb, you would see a “Night Vision Brightness” setting in the bulbs settings.