So I’ve gotten it to successfully cycle through every single color by setting the “change” slider to 180degrees. It’s nice but there’s a slight jump between orange and pink… Not so smooth. Anyone know how this works? I’d use “random”, but I wish the speed slider could go higher than 3000ms. I’m looking for a slllloooowwww fade, imperceptible but effective mood lighting. Thank you.

The way I would approach this would be to write a script that changes the hue by one degree and sends a command with a long duration. I understand this wouldn’t be very accessible to non-developers though…

Connect them to Smartthings and use a smartapp called CoRE. That will work. That’s how I do it.

eric182 thanks for your suggestion, but with the cycle functionality already available via the app it seems unnecessarily complicated to have to utilize third party protocols and apps to get this seemingly basic feature. I also cannot understand why the developers would cripple this feature so much with short cycle times and overly complicated variation, difference and change settings. brightness, hue, degrees and duration (speed) seem much more intuitive and easily understandable.

Eric182, would you mind sharing your CoRE piston? 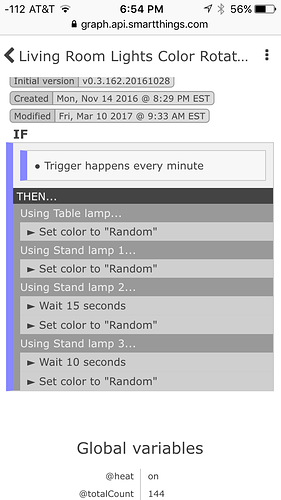 Does this fade between the colors?

No, but you can make it fade if you want to by adding those commands in the core piston 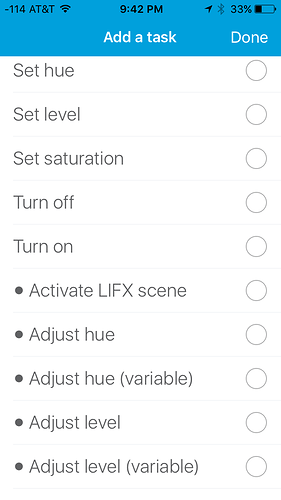 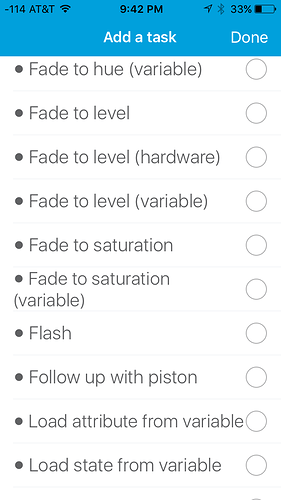